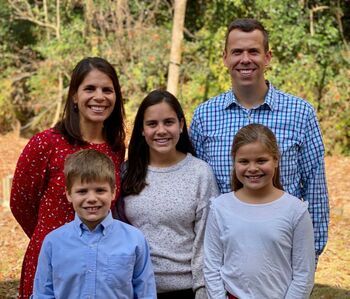 Bradley’s experience with global missions began during his college years at Auburn University when he spent three summers with MTW in Odessa, Ukraine. The experience changed his life, worldview, outlook on the global Church, and his view of God’s kingdom.

Sara’s journey in global missions began with a short-term trip to Mexico. While a student at Auburn University she also went to Romania to do mercy ministry, working primarily with orphans. God’s work in Romania drew Sara back on five additional trips.

In 2007, they began life as a married couple and in 2011 they joined the MTW church planting team in L'viv, Ukraine. They served in L'viv for 8 years in a variety of roles. Bradley served as the team's Executive Administrator, launched and directed a publishing house and led an English Bible club. He continues to serve MTW Ukraine as the Director of Kraynebo Publishing. In addition to caring for her family as a wife and mother, Sara developed relationships with other women and families. She also worked in various children's and women's ministries of the church plant.

In 2020 they joined the MTW US Mobilization Team. They currently live and serve in Birmingham, AL while continuing to serve MTW Ukraine remotely (Director of Publishing & various admin roles). Bradley serves as a Mobilizer and a MPD Coach (MPD = "ministry partner development"; aka, support raising). He coordinates a mobilization project called The Birmingham Missions Cohort (B-MC). B-MC is an intentional community seeking to train and mentor followers of Christ to use their gifts in God's global mission. As a MPD Coach ("support raising" coach), Bradley coaches missionaries during the support raising process which helps new missionaries reach the mission field faster and fully funded. Sara loves connecting with internationals in Birmingham, and she teaches ESL classes. By God's grace, they desire to serve the local church, to mobilize global missionary laborers for God's harvest and to see God’s glory proclaimed to the ends of the earth.

TO GOD BE THE GLORY!